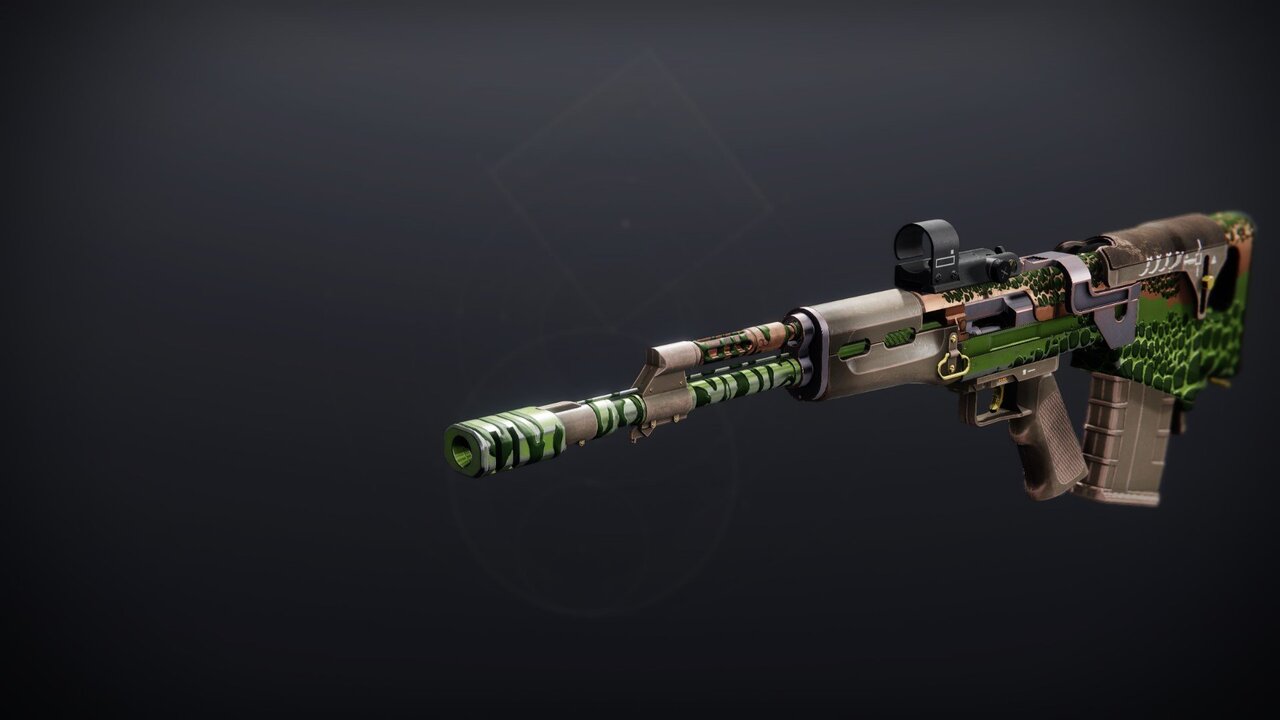 The Jurassic Green pulse rifle is back in Destiny 2 with the Festival of the Lost. Once you have found a copy or two of Jurassic Green you can start looking for the PvP or PvE god roll.

Jurassic Green is a Rapid-Fire Frame pulse rifle, meaning it has deeper ammo reserves and a slightly faster reload when the magazine is empty. It also fires 540 rounds per minute. Here are the other basic stats for Jurassic Green:

Jurassic Green is a fairly good pulse rifle for PvE and PvP. For the barrel attachment, the PvE Jurassic Green god roll calls for the Smallbore. Though the handling isn’t great on Jurassic Green, what is more important is boosting the range and stability.

For the magazine, try to get something that furth increases range and stability. Our picks are Ricochet Rounds for PvE since the bouncing bullets will help deal more damage and it gives a buff to stability and range.

The first perk for the PvE Jurassic Green god roll is Subsistence. This is a great perk that allows you to partially reload your magazine from reserves after defeating targets. Whether you are clearing out hordes in Haunted Sectors or trying to farm Candy, this is a great perk to have.

For the second perk, it sort of depends. If you have a great grenade build like a Solar 3.0 Warlock, then pick Adrenaline Junkie as grenade kills and weapon final blows will increase Jurassic Green’s damage and handling. If you want to rely more on your weapon Dragonfly will create an elemental damage explosion, which is great because pulse rifles are excellent at precision kills.

The Jurassic Green PvP god roll is similar to the PvE god roll, but different in a few ways. For the barrel and the magazine, still pick Smallbore and Ricochet Rounds. Any attachment that boosts range and stability is good, but those two are the best.

When it comes to the Jurassic Green PvP god roll first perk, Rangefinder is what you want. With this perk, the zoom and range of Jurassic Green will increase which is perfect for long alleyways in the Crucible.

The second perk to pick up for the Jurassic Green PvP god roll is Multiclip Kill. Though there isn’t a clear winner with the second perk, Multiclip Kill is great for PvP because it will increase the weapon’s damage when reloading after rapid kills. It’s not incredible, but it’s that or Adrenaline Junkie for the best PvP Jurassic Green god roll perk.

If you want to check out the Mechabre god roll or anything else happening in Festival of the Lost, visit our Destiny 2 page for more.