Genshin Impact can be overwhelming at first, but this guide will help you learn all about the Currencies in the game! 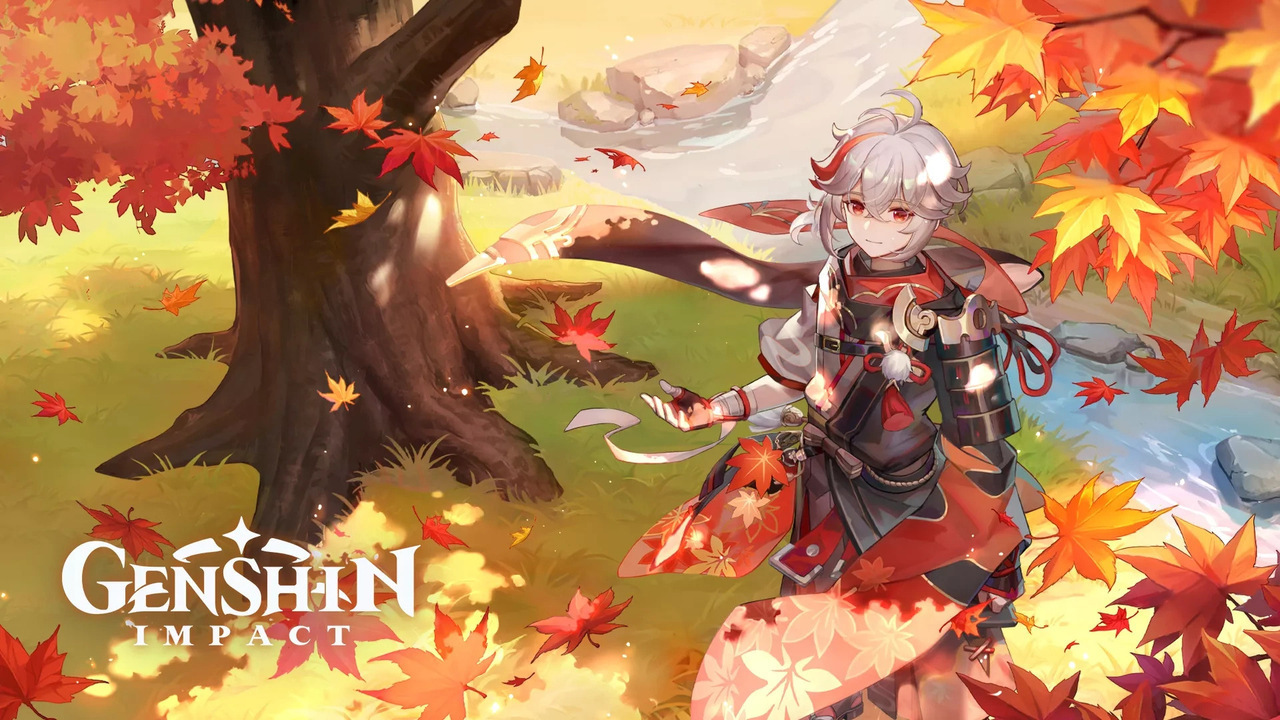 If you’re looking to get into the world of Genshin Impact, it can be fairly daunting at first glance. While all of the newest content updates, the staggering amount of characters you can unlock, and everything else that this massive free-to-play title has to offer, you can find yourself lost quite easily after starting it up for the first time.

However, one of the biggest draws of the title is the fact that you can unlock characters within its world using its Gacha System, which gives you a randomized draw of different players to earn, weapons to possess, and so much more. While you can play the game, and earn these rewards with no money down, you may want to get ahead at points, and earn a specific character, if the RNG Gods are feeling kind. Here is everything you’ll need to know about how the Gacha System works, and how you can use it!

As you make your way into the lands of Teyvat, you’ll find plenty of loveable characters that you’ll be able to interact with, and you’ll wish that you could have them on your team. The great news is, that most of these characters are actually playable, but you’ll need to use the Gacha System to try and unlock them.

For those that are unfamiliar with the phrase, a Gacha System works almost like the lottery, where you’ll have a low chance of unlocking rare characters, a better chance of getting your hands on good characters, and the best chance to get some new weapons into your inventory. Some Wishes, the way to roll for these characters, will be absolutely amazing, and some may not be so great.

As you work through different missions in the game, you’ll begin to start earning Primogems, which will give you a chance to Wish for these characters and weapons, characters, and more. If you’re patient, you’ll be able to unlock a fair number of them, and you’ll be able to draw for 10 Wishes at a time, which increases your chances of getting your hands on better rolls.

What different ways can you obtain Wishes, however? There are quite a few different ways, so let’s get into all of them down below. With paid options and free options to obtain them, you’ll want to make sure that you’re up to date on everything in this title.

One of the easiest ways to obtain Wishes in the world of Genshin Impact is through the use of Primogems. As you venture throughout the world, completing different quests, commissions, and exploration tasks will unlock small amounts of Primogems, which can be converted into different types of Wishes.

If you’re looking to go one at a time, you’ll be able to drop 160 Primogems to obtain either an Acquaint Fate or Intertwined Fate, which will allow you to pick a specific Wish that you would like to cast. This may take some time to achieve, but it allows you to experience and expand your time in the world without needing to spend any real-world money. You’ll be able to pair the ability to earn these in games, with a small purchase that we will speak about shortly.

As you make your way to the Wishes tab in the game, you’ll notice that two different types of Fates can be used to cast these rolls for characters and weapons. The first, the Intertwined Fate is an item that will be used to roll for the newest Banners that are available, as well as special event Banners that are time sensitive in the game. With the 3.0 Update that recently came along, you’ll be able to use these to roll for Viridescent Vigil, Gentry of Hermitage, and Epitome Invocation.

On the other hand, if you’re not interested in getting hands-on with the newest characters, the Intertwined Fates will allow you to roll in the Wanderlust Invocation, and Beginners Wish. The first 10 Wishes that you use in Beginners’ Wish will also grant you access to Noelle, and every 10 Wish roll in Wanderlust Invocation will guarantee a 4-Star Character or Item. This could be great for those that are trying to unlock a specific character or weapon, and if you need to work on leveling them up even more. 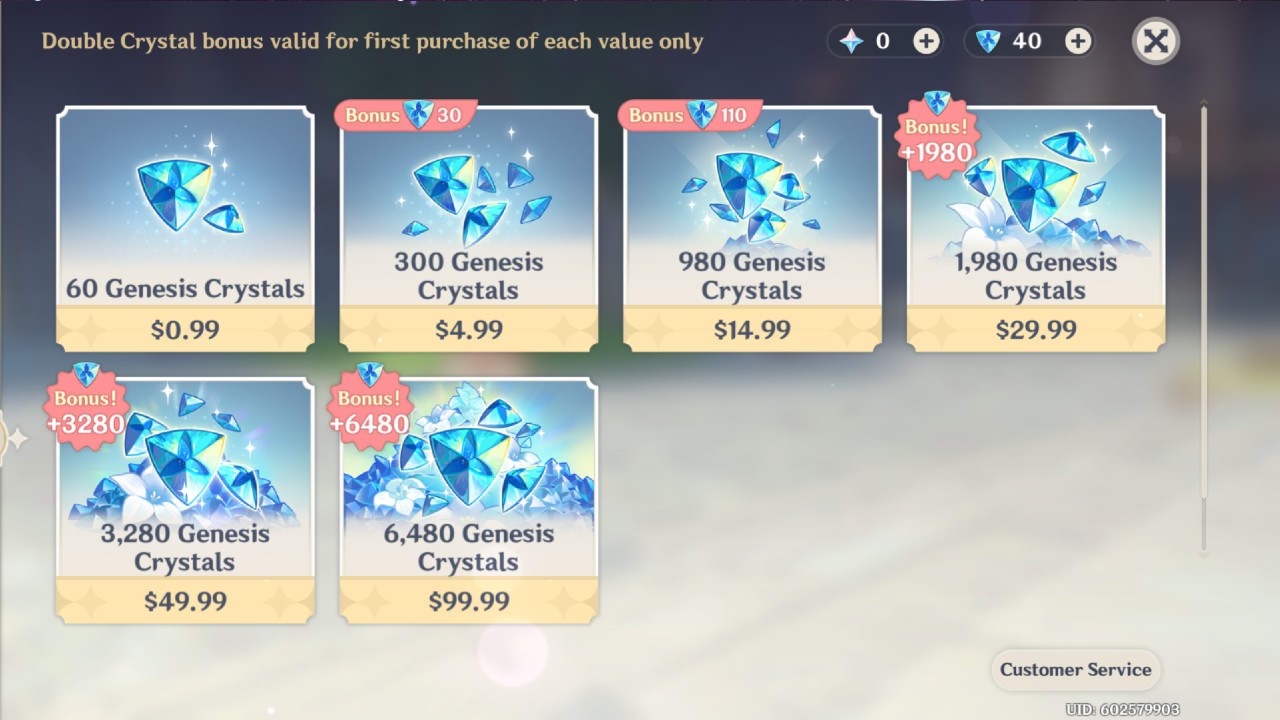 If you’re wanting to roll for different Banners and don’t want to put up with the grind, you’ll be able to purchase Genesis Crystals with your real-world money to give you plenty of opportunities to unlock new characters. These microtransactions can range anywhere from $0.99 up to $99.99. To grant One Wish, you’ll need 160 Genesis Crystals, with 10 Wishes costing you 1,600 Genesis Crystals. If you don’t mind spending a few dollars here and there, you’ll be able to purchase these at any time, giving you a chance to pull for more of your favorite characters and weapons.

If you would like to purchase these Crystals, you’ll be able to do it no matter the platform that you’re on, and you’ll have a total of 6 different bundles to choose from. They are as follows:

Blessing Of The Welkin Moon

If you’re a player that has plenty of time on their hands and doesn’t mind waiting a while before you get the chance to cast more than a few wishes, the Blessing Of The Welkin Moon is something that you should seriously consider purchasing. When making this purchase, you’ll spend $4.99 and instantly unlock 300 Genesis Crystals, as well as 90 Primogems a day for a total of 30 days. However, what makes this a fantastic purchase all around is the fact that you can purchase it again in the future to keep earning this excellent bonus.

As you continue to explore and earn Primogems, you’ll be able to hold on to the ones that you earn from the Blessing Of The Welkin Moon, giving you a chance to pull for some major wishes in the future. Unfortunately, while you can purchase them multiple times, this does not stack, but rather adds another month to your timer, so you can keep earning them in the future. As you’ll earn a total of 2,700 Primogems throughout the month, you may be able to do two or more 10 rolls by the time the month is up, depending on how much you are playing. Just remember to log in each day, otherwise, you’ll miss out on some primos across the month!

As you start to do different Wishes in the game, there’s a good chance that you’ll eventually start rolling duplicates for items that you already have, or characters that you may have already unlocked. Thankfully, it isn’t a total loss if this happens, as you’ll earn a residual credit that follows you through to your next rolls.

Masterless Stardust is something that you will be able to earn as you start rolling duplicate weapons, and is usually earned in increments of 15 at a time. After you have earned 75 of these, you’ll be able to make your way to Paimons Bargain Shop and purchase an extra wish of your choosing with this, allowing you to get an extra draw or two if you need it. Just be careful, because you’ll only be able to redeem 5 of each type per month, so you may need to wait a while and continue to earn more while you wait for these to refresh.

Starglitter, on the other hand, is the more premium of this currency. You’ll only unlock Starglitter if you roll a character you already have. This makes it a bit harder to obtain, but you can unlock plenty of Wishes if you have plenty of characters. You’ll also receive 2 Starglitter for every 4-Star Weapon you roll. If you want to find out how much Starglitter you get per character, see our chart below.

If you’re looking to upgrade your weapons and characters, buy items in the shop, and more, you’ll need plenty of Mora to make that happen. Thankfully, more often than not, you’re going to have more Mora than you know what to do with, as you’ll earn plenty of it from defeating enemies, adventure quests, and just about anything you do in the game.

Certain weapons and characters will require special items to Ascend, and sometimes, you’ll be able to purchase these items from various shopkeeps that reside around the world, so make sure that you’re saving your Mora for a rainy day may benefit you more than you could expect.

As you can see, there is plenty to learn about the world of Genshin Impact, and these are just the ways that you can earn new characters and weapons! If you’re wanting to learn more about this title, make sure that you’re checking into our Genshin Impact Guide Section, where you’ll be able to find out location materials in Sumeru, the best fishing spots in this new region, and the easiest way to claim daily login rewards.