The Marvel’s Avengers Community Has a Spider-Man Problem

This community can't afford to be picky. 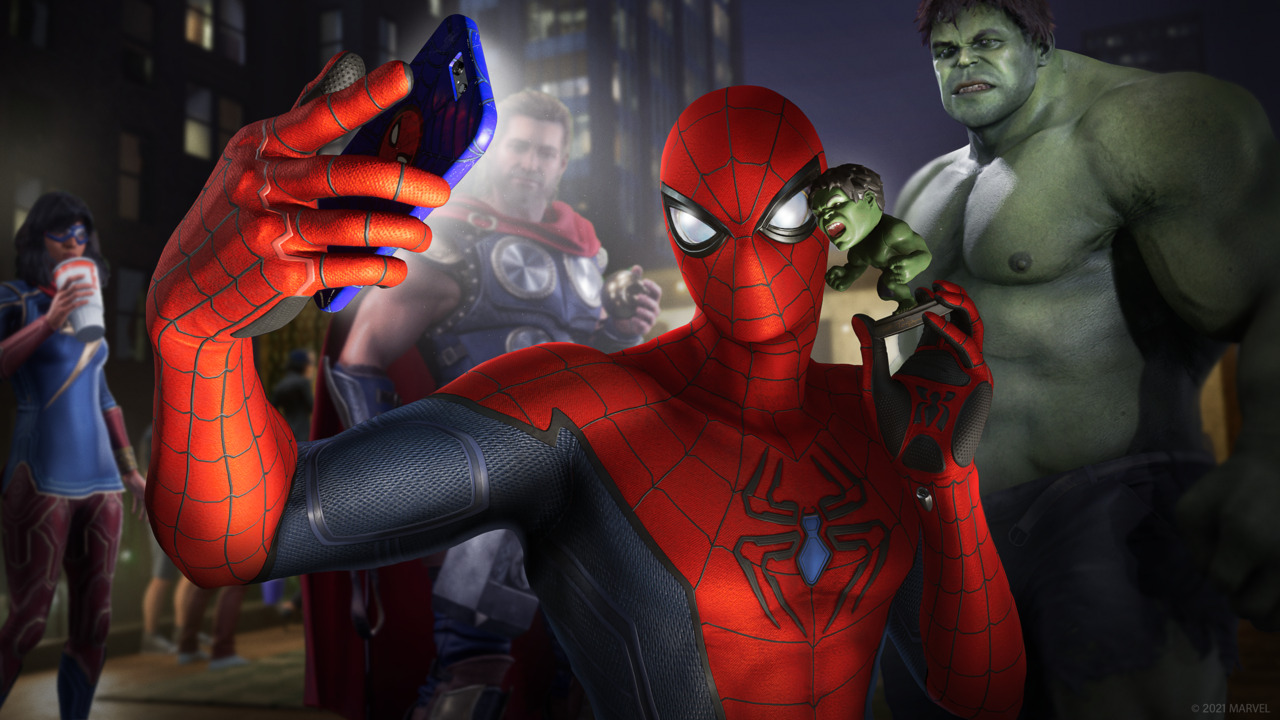 Despite its slow and steady upswing (too slow according to the community and outsiders alike but that’s another article entirely), Marvel’s Avengers just can’t catch a break. The game has been constantly improving since launch, but it seems like every victory comes with multiple caveats preventing new players from jumping into the experience.

Plenty of postgame content was planned, but the AIM Cloning Lab initially scheduled for the launch window is nowhere to be seen. The War for Wakanda expansion was well received, but the raid came way too late and was plagued with bugs. New heroes continue to join the roster, but outsiders have a hard time getting excited for “echo“ characters like Kate Bishop and Jane Foster. For the dedicated Marvel’s Avengers community, however, there are even more deep-rooted issues that are driving veteran players away.

Unfortunately, I like Marvel’s Avengers. I love the game, I love the superhero team-up fantasy that it provides and I love the gear grinding itch that it scratches. However, as I get further and further into the endgame loop, reaching the soft cap with multiple heroes and tackling endgame content like the Omega Level Threat and Discordant Sound Raid, it gets harder and harder to recommend one of my favorite games to my friends. That’s largely due to one major issue that’s emblematic of the community as a whole: the Spider-Man problem.

Spider-Man joined the Marvel’s Avengers roster alongside the release of the Discordant Sound raid late last year, but only PlayStation players have the privilege of playing as the wall-crawler. People who don’t play Marvel’s Avengers were quick to criticize Spidey’s traversal mechanics and combat animations once he was released. People who actually play Marvel’s Avengers, well, they did the same. Still, that hasn’t stopped the webhead from becoming one of the most popular heroes on PS4 and PS5.

Most of Spider-Man’s kit revolves around webs, a unique status effect that immobilizes enemies. Most of Spidey’s best gear pieces, including his exotic sets, are designed around webs, boosting his stats, stun capacity, damage, critical hit rate, and more when enemies are webbed. He’s an absolute beast when it comes to clearing rooms of AIM bots or Klaue Company mercenaries, making the initial leveling process for Spider-Man a blast.

I personally spent the last few days getting Spidey to the current power level soft cap of 150, exciting to dive into endgame content for the first time with my favorite hero in the game. I watched guides for both the Super Adaptoid Omega Level Threat and the Discordant Sound raid, studied builds and found decent gear, and felt ready to tackle what laid ahead. I queued up for my first OLT and saw names pop up surprisingly fast, only for them to disappear seconds later. I didn’t know it at the time, but like J. Jonah Jameson, the hardcore Marvel’s Avengers community considers Spider-Man to be more of a menace than a hero.

when a Spider-Man joins my OLT strike team from PlayAvengers

You see, the web status effect that makes Spider-Man good doesn’t apply to bosses. That means he’s at a disadvantage during the OLT and raid, which are entirely boss centric, and some people just don’t want to put up with that. The Avengers community places a huge emphasis on broken builds and speed run strategies, which is why you see heroes like Thor a lot in endgame content. The game used to have this problem with Hulk, who could demolish bosses with his Thunderclap ability before it was nerfed.

Spider-Man can really only hold his own next to insanely broken heroes like Thor if you build him a certain way, usually prioritizing his Spider Drone ability, but even then, he can’t output damage anywhere near what the top-tier heroes can manage and the community isn’t willing to take a chance on Spidey mains for the most part.

I can’t get a group for the OLT. I think its because I am play spider-man 155 power and champion 83 but everyone just leaves from PlayAvengers

Now don’t get me wrong, this isn’t the entire community. I was still able to find teammates for endgame content after waiting a while and tolerating a few leavers. However, the Spider-Man problem itself isn’t the main issue with the game. It’s emblematic of some of the biggest issues plaguing the endgame loop of Marvel’s Avengers at the moment.

The first problem with Marvel’s Avengers that Spidey highlights is the lack of join-in-progress functionality. Despite endgame content requiring 4 human players, if someone leaves, disconnects, or rage quits, you’re out of luck. This is a common issue for every Avengers player, but it’s only exacerbated by Spider-Man. I’ve had multiple instances of people giving my Spidey a chance and not immediately leaving, only to rage quit the second someone goes down because they blame it on a “weaker hero” on the team. This is especially bad for the raid, where someone can leave during the final boss. There’s not even a way to reconnect if someone glitches out, which is mind-boggling for a live service game in 2022 that has been around for two years at this point.

The second and more prominent issue with Marvel’s Avengers that Spider-Man demonstrates is an extreme lack of balance and variety with endgame builds. Ranged damage is ridiculously overpowered in Marvel’s Avengers. If you want to have a meta build with any hero, you need to play ranged. Spider-Man’s ranged ability is his web-shooters, which hinge on web damage that, again, doesn’t apply to bosses. On top of that, the hardcore players farming gear in endgame content won’t just immediately leave if they see a Spidey player. Sometimes, they’ll just leave right off the bat if you’re not rocking a specific meta hero and build.

If all you want is a quick Raid with high level people, why even matchmake with randoms at all? from PlayAvengers

Again, I want to reiterate that this isn’t a problem with the entire community. It’s not like you can’t find players if you’re deviating from the meta. Plus, every game like this has elitists. The problem is that Marvel’s Avengers has such a tiny player base, and the sluggish patch schedule is only causing the game’s player base to bleed further. This is a case of the game’s community being picky when they can’t afford that luxury.

If you don’t believe that the game has an incredibly small community, then take this article for example. It’s really late, right? Spider-Man came out in December and this phenomenon has existed for a while. Marvel’s Avengers is so far out of the public eye that someone didn’t bring it up until now, in the middle of July, when a game like Destiny would’ve had an opinion piece like this go up just a few days after the patch. Pretty much the only coverage this game gets is negative, reporting on nasty bugs or dwindling player counts.

If you’re a diehard Marvel’s Avengers player, you’ve probably encountered players like I’ve described above. You also probably recognize that they’re a few bad apples that don’t completely break the experience. At the end of the day though, Marvel’s Avengers is not in a good spot and hasn’t been in one for a long time. Prospective players are turned off by the slew of negative press. That means that an issue like this, no matter how small, that discourages people who actually want to engage in the endgame loop and play the game regularly, is a huge problem.

Every hero on the roster brings something to the table, even if they’re mostly support-centric heroes like Ms. Marvel or Spider-Man. Sure, it would be great if Crystal Dynamics would release a patch buffing underused characters, but as it stands, not giving players a chance based on something as simple as their chosen hero just fosters toxicity and prevents the community from growing to a healthy size.

When you try the Raid and OLT for the first time as Spider-Man: from PlayAvengers

You can watch all the build guides you want. You can min-max your Thor build as much as you want. You can even melt the Super Adaptoid in 10 seconds if you want. None of that excuses toxicity toward new players. People just reaching the power cap don’t know how to build yet. Most Avengers players are casual and won’t do research about the best gear and stats for their favorite heroes, and that’s simply a result of the IP.

Do your best to educate or at the very least tolerate. Otherwise, you’ll be stuck with a dwindling player base and a community that continues to become more and more elitist. With the game currently on Xbox Game Pass and PlayStation Plus, the Avengers community needs to do better. New Avengers are assembling, and the last thing this shrinking community needs is to turn away players who actually want to stick around for endgame content.

Believe it or not, Marvel’s Avengers is poised to grow a great deal in the next few months now that the systems-focused patches are out and the community is mostly happy with gear changes.  With more content releases, like the upcoming She-Hulk and Winter Soldier, players will come back. Some of them might even stay. It’s up to the community to make sure they do.